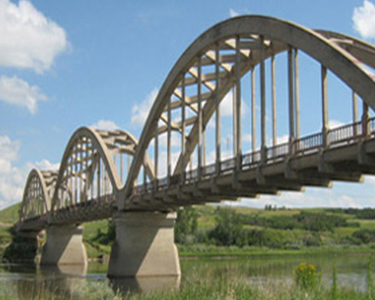 The old concrete bowstring-arch bridge was built as a Depression make-work project and opened in 1937, replacing a ferry service. It was designed by Bev Evans for his master's thesis while a graduate student at the University of Saskatchewan.
The Borden Bridge is a wonderful historical landmark located on HWY #16 just East of the Village of Borden.
Construction took place between 1935 and 1937 by R. J. Arrand Company of Saskatoon. At 250 metres long, the bridge was the longest bow-string arch bridge in North America at construction. Laborers were paid 35 cents an hour during construction, and 50 cents if they brought a horse.
The old Borden Bridge was sold to Orville Middleton in 2007.
During spring, summer and yes, even fall months people can be found lounging on the banks getting in some fishing, and some even fishing from the old bridge itself.
https://youtu.be/vodIzwb7rQI